Discover whether your ancestor was one of the thousands of electrical engineering apprentices who passed through the Manchester-based Metropolitan-Vickers Electrical Company Ltd's training centre in the early twentieth century. Learn personal details from your ancestor's company records and understand more about the work they did and life that they would have led.

The amount of information listed varies, but The Electrical Engineering Apprentices & Trainees records usually include the following information about your ancestor:

You can search for ancestors who may have trained with the electrical engineering company Metropolitan-Vickers at Trafford Park, Manchester between 1902 and 1934. The records list 4,756 ex-apprentices and trainees. Many lived in Manchester and the surrounding area, but a significant number were based overseas, showing the company's worldwide reach.

Metropolitan-Vickers specialised in heavy electrical engineering but during its history it produced products as diverse as aero engines and the first transistor-based computer.

The first edition of A Register of Ex-Apprentices and Ex-Trainees of the Metropolitan-Vickers Electrical Company Limited was published in 1935.

These records are transcriptions of the original register of Metropolitan-Vickers apprentices and trainees, published in 1935. 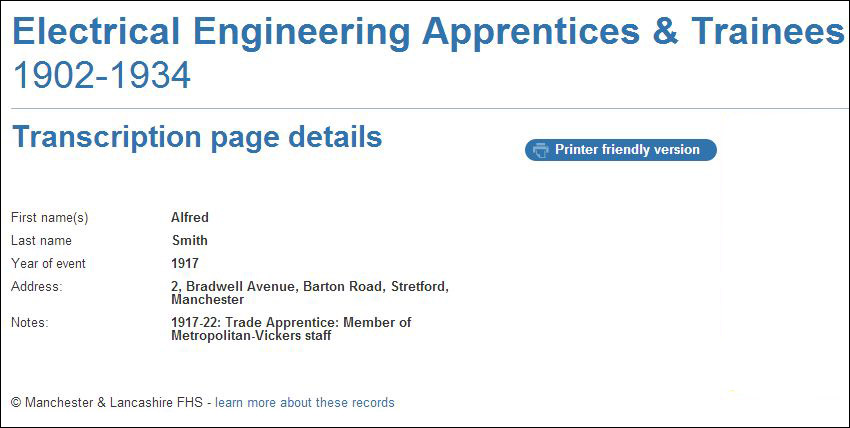